UPDATE: We now have a full review of the MSI Sword laptop. Read below to understand how it differs to the MSI Katana.

MSI has once again released a slew of laptops. We got to play with three engineering samples of the forthcoming range. Here we are looking at the MSI Katana. Or are we?

MSI has actually launched twin laptops: the Sword and Katana. In most of the world you can tell the Sword by its white-and-black chassis with blue-lit keyboard while the Katana has an all-black chassis with a red-lit keyboard – sort of Luke vs. Vadery. Otherwise they’re identical. For reasons that virtually nobody is sure of, in Australia (and South America) the global Katana (black with red keyboard) will be sold as the MSI Sword. The white and blue MSI Sword itself will not be available in Australia at all (officially) and nor will the MSI Katana… except that the Katana will be available – it’s just called the MSI Sword here. Got that? Good. [Update: Apparently both the international Sword and Katana will be available in Australia in June. Our test unit is apparently a black Sword that is the exact same as its twin, the Katana. Got that? Good. We’ll review the retail SKUs when they appear to eliminate any confusion.]

Last year, MSI invited concept artist Colie Wertz (who was one of its product ambassadors) to design a Limited Edition “Dragonshield” livery for the rather-excellent MSI GE66 Raider. We were hugely impressed by its looks and not just because Colie had helped design some other cool things like, you know, parts of The Death Star and Iron Man’s suit. Now, MSI has further embraced this design ethos and invited other international designers to design variants for its new range. The Sword and Katana are from the MSI GF laptop range and have been designed by Japanese designer Tsuyoshi Nagano who is, “A Japanese illustrator, famous for his cover artwork on  “The Romance of the Three Kingdoms” video game series since 1980s. He has dedicated on gaming series for a long time and makes him a professional creators. His art style is realism, has influenced many other series such as Dynasty Warriors.” [sic]

MSI says that you choose the the Sword or Katana depending on which style you most identify with. If that’s tricky to visualise for Aussies, have a look at this nice picture of Samurai.

Both MSI Katana and Sword models are available in 15 and 17-inch variants. They are equipped with the latest 11th Gen. Intel H series octa-core processors and Nvidia GeForce RTX 3060 series GPUs. We’re told, “The powerful specs are as strong and powerful as a katana and optimized to unleash true performance during gameplay. Gamers are able to enjoy smooth and responsive gameplay, just like a warrior of the Dragon Clan brandishing a mighty sword.” The latter means that the screens have fast 144Hz refresh rates.

The laptops are also equipped with MSI’s Cooler Boost 5 (two fans, six heat pipes) cooling system. with the specially designed air inlets and outlets supposedly resembling Samurai warrior armor. These are found on both sides and (mainly) at the bottom of the main chassis.

To be frank, other than the underside, this laptop is as understated as a laptop that’s been specially designed by a famous designer gets. The spiel about tough, lightweight armor resonates for sure but it’s essentially a black plastic chassis with a stamped logo that’s barely visible. There’s some brushed detailing on the MSI Katana’s sides but it’s only visible up close and in good light. While it’s subtly different to previous GF models, could it be too subtle?

Nonetheless. while we couldn’t run any meaningful tests on it, hopefully it’s as cool and quiet under load as this engineering sample suggested it would be. It does indeed look like it will be a light-weight, powerful, high-value proposition. We look forward to finding out with a full review when it’s available. If you want to see more about the new range, click here. [Update: The MSI Katana (Sword) can now be pre-ordered from Scorptec for $2,299]. 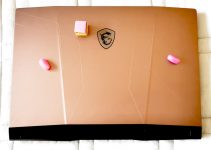 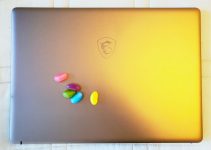