The Acer ConceptD 3 Ezel is a Creator-designated workstation with a flip-top touchscreen. Inside it uses relatively old technology, but is it still a good buy?

The Acer ConceptD 3 Ezel looks fresh with its white chassis, silver, mid-lid hinge and peach-backlit keyboard. It’s susceptible to scuffs and scratches though. We didn’t mistreat it, but it still ended up with a big scratch on the lid which wasn’t easily removed. The keyboard is very comfy and accurate to type upon for extended periods. The arrow keys are slightly reduced in width but they’re still very usable. The trackpad is smooth and accurate and is comfortable to click upon. There’s a thick(ish) bezel around the screen that’s topped by an impressive HD webcam.

The Acer ConceptD 3 Ezel’s screen is a matte, Full HD, 14-inch touchscreen. The hinge that’s located halfway down the lid enables it to flip into a Starship Enterprise configuration which will appeal to a certain niche. It’s an interesting alternative to a straight-up tablet convertible.

Colours aren’t the most vibrant but the screen is bright, well-lit, crisp and clear when displaying a Windows Desktop. Acer states it supports 100 per cent of the sRBG colour space but professional designers may want more.

When viewing videos, we were a little disappointed by the banding in chromatic and especially monochromatic transitions. A good Creator-designated laptop should perform better. Contrast is decent with details prevailing in dark and bright areas. The touchscreen is responsive. When it comes to fast motion, the standard 60Hz refresh rate tells us that it’s not great for gaming but the relatively slow pixel response time means there’s a fair bit of additional ghosting on top of that.

The speakers have reasonable volume and fidelity but there’s not much bass response.

The processor in the Acer ConceptD 3 Ezel is a 10th Gen, 2.6-5GHz Intel Core i7-10750H. This gives us cause for concern as we shudder when we think of how loud the Acer Helios 300 was with its 10th Gen processor and loud cooling system. It’s paired with 16GB RAM and a 512GB hard drive.

The GPU is a workstation-oriented Nvidia Quadro T1000. This focuses on accuracy above raw performance and so we pay little heed to the gaming-oriented benchmarks. It scored 1369 in Time Spy (an average of 8fps) and 3372 in Fire Strike Extreme (average 15fps). It also scored 0.3 in the difficult Port Royal ray-tracing test. This isn’t a gaming laptop.

If the workstation GPU is your focus, just note that it’s not totally silent. There’s a constant, noticeable whoosh from the cooling system even when it’s not under load.

Connectivity of the Acer ConceptD 3 Ezel

Inside there’s Wi-Fi 6 and Bluetooth 5.1. While it’s all a bit last-gen, it’s still very usable.

At 1.9KG it’s not heavy for a 14-inch, 19mm-thick laptop but it’s not light either. The power brick and cables add 470g. It ran PCMark 10’s Modern Office test for an impressive 9hrs 35mins – more than a day out of the office. The build quality, despite the scratch proclivity, is robust.

Should I buy the Acer ConceptD 3 Ezel?

Acer says that the ConceptD is currently on sale – from $3,799 down to $2,699. While we always expect to pay more for workstation graphics, this still isn’t cheap. However, if you need the GPU and the interesting screen configuration is what’s been missing in your life, it could represent great value.

If you need the workstation GPU and the interesting screen configuration is what’s been longing for, check it out. 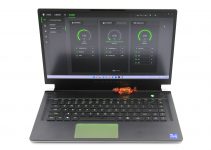 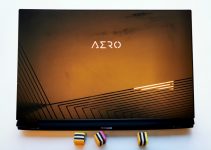