We were impressed with our first look at MSI’s last MacBook Killer, the Creator Z16, a few months ago. However, before we got to test the real thing, we got our hands on the brand-new version with a 12th Gen Intel processor. Amongst other things it’s apparently the first 17-inch laptop with a touchscreen-based stylus. Will the MSI Creator Z17 be the Macbook-killing PC-based laptop we all want it to be?

The MSI Creator Z17 intentionally apes Apple’s MacBook and with its CNC-milled, ‘Lunar Grey’ Aluminium chassis. It’s built like a tank and very cool. The Apple logo is replaced with a low-key, glossy MSI dragon which will please many. Opening it up reveals a 17-inch screen with a thick black bezel and a Scrabble-tile keyboard that’s comfortable and accurate to type upon. The number pad and arrow keys are reduced in size but they’re very usable (unlike so many squished alternatives). The large trackpad is smooth and accurate and the buttons are nicely clickable.

The MSI Creator Z17’s 17-inch glossy screen has a UHD 2560 x 1440 resolution which keeps the Windows Desktop very sharp. It also gets very bright and the colours are vibrant. Being a Creator laptop it’s great for designers and it supports 100 per cent of the difficult DCI-P3 colour space with a Delta E rating of <2. Every unit is factory calibrated for colour accuracy and Calman Verified. It’s glossy and yet does an impressive job at fending off reflections and fingerprints. It also comes with the 4096-pressure-sensitive MSI Stylus which is rechargeable via USB-C and supports MPP2.0. Apple laptops don’t have this and no other 17-inch laptop does either.

The MSI Creator Z17 screen’s 165HZ refresh rate keeps fast-moving objects silky smooth and the pixel response time means there’s minimal ghosting. This means it’s great for both fast moving multimedia AND gaming. The bright screen helps with contrast and details are visible in both bright and dark areas. We were also impressed at the lack of banding in both chromatic and monochromatic gradients. It’s arguably the best non-OLED screen we’ve seen for designers.

The webcam has an impressive, Full HD resolution and there’s a quad-microphone array for high quality videoconferencing.

Inside the MSI Creator Z17 is a 12th Gen Intel 3.5-4.7GHz Intel Core i7-12700H processor which has six performance cores, eight efficiency cores and 20 threads. It combined with 32GB of the new DDR5-4800 RAM and 2TB hard drive to score a very impressive 7056 in the general-computing PCMark 10 test. All the cores and threads combined to score 2887 in the Cinebench R15 CPU rendering test and 15,803 in the longer R23 rendering test. This all means it’s the third fastest 2D performer we’ve ever tested.

In our 3D tests, the MSI Creator Z17’s Nvidia RTX 3070 Ti GPU (with 8GB GDDR6 RAM) scored an impressive 9118 in 3DMark Time Spy which is an average of 55fps. In Fire Strike Extreme it scored 10,907 (average 44.5fps) while in the challenging Port Royal ray-tracing test it scored 5456 (average 25.26fps). These are impressive scores for any laptop, let alone one with a Creator designation! However, it’s worth noting that the Gaming-designated rivals do get faster – likely due to their overclocking abilities (and overclocking-suited chassis).

Cooling is provided by MSI’s Cooler Boost Trinity+ system which utilizes three fans and five heat pipes. While it is certainly effective, under consistent load there’s a loud whoosh which will be noticed by most people in an office. It also gets very hot. Under basic operation there’s a consistent, low whooshing sound which isn’t distracting but it’s certainly noticeable. Performance does not appear to be impacted by the thermals though, so we don’t mind losing the overclockability. Update: After additional torture testing it became clear that there is some minor performance degradation when under persistent, heavy load. While this doesn’t affect most workflows, the heat created (93oC hotspot!) does ding it half a point in our Stability score.

Connectivity of the MSI Creator Z17

Inside there’s Wi-Fi 6E and Bluetooth 5.2. In short, it’s got the latest everything.

Should I buy the MSI Creator Z17

According to our scores, this is currently the third fifth best laptop on the market which is extraordinary for a Creator laptop which normally trips over its slow screen. The MSI Creator Z17 has very few weak points beyond getting hot and being slightly loud. It’s well worthy of the title, ‘MacBook Killer’ thanks to its PC-compatibility, fast, high-performing screen, 3D performance, touchscreen and stylus. Ultimately, it works brilliantly for designers and gamers alike. It’s expensive at $5499 but with the features, performance and ergonomics on offer, it’s still great value. It’s arguably the best all-round laptop we’ve ever seen. 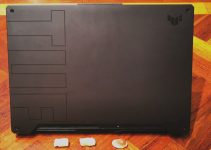